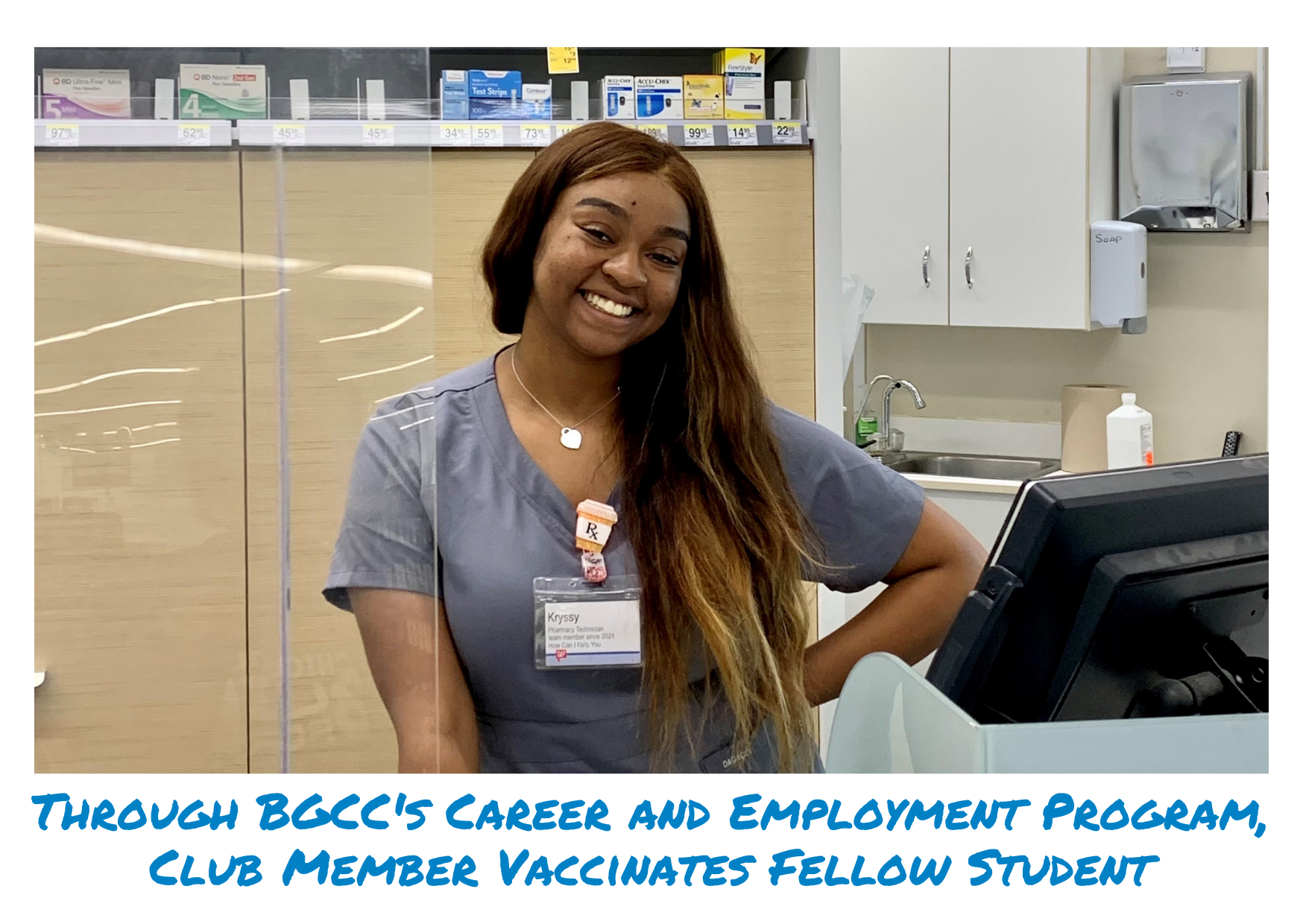 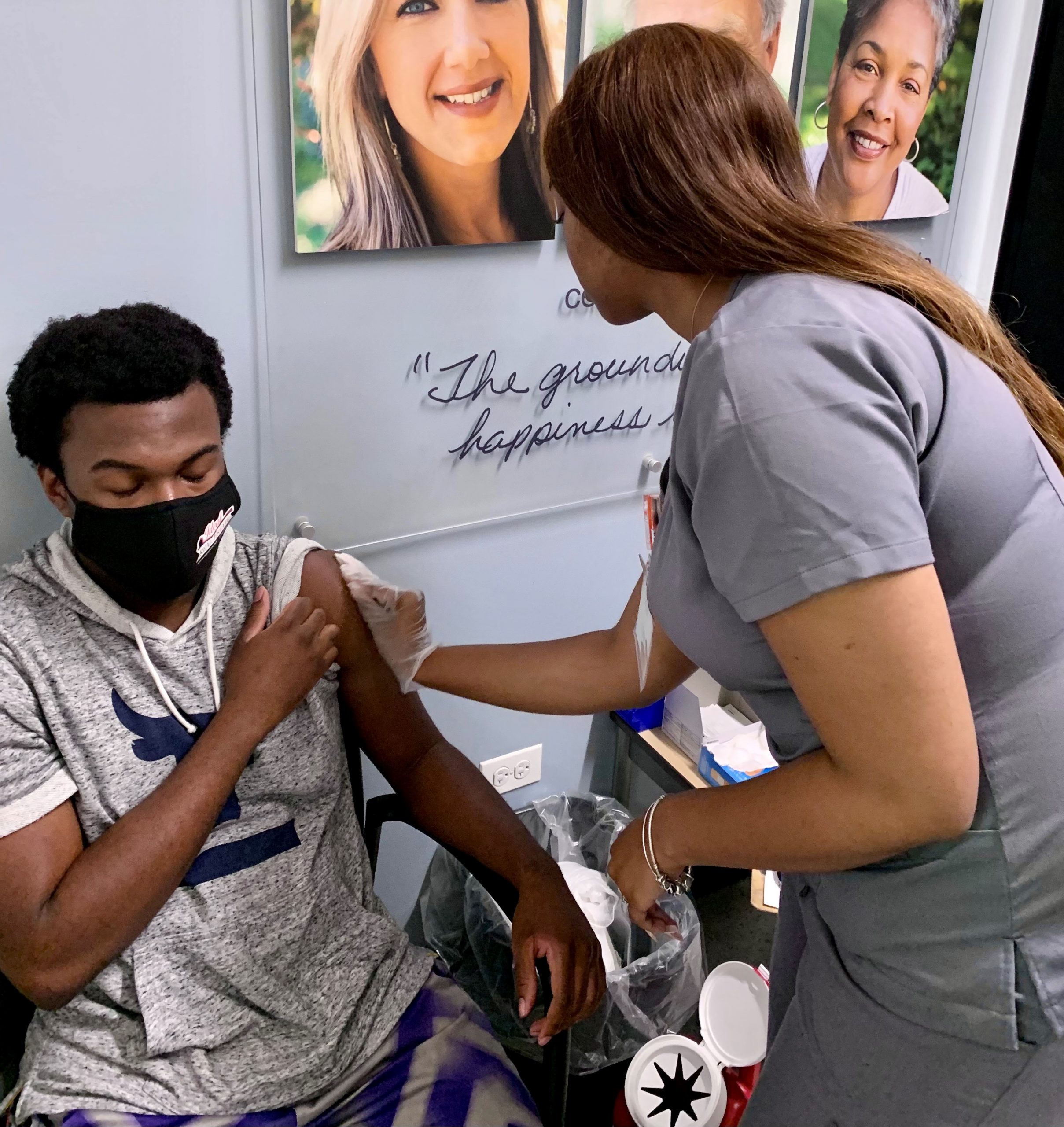 Nicholas B. walked into the Walgreens with his sister and his mom, nervous – he wasn't a fan of shots. But he also knew he wanted to get the COVID-19 vaccine and it was worth facing a needle.

What he didn't know was that he was about to get his shot from a fellow Boys & Girls Clubs of Chicago member and 18-year-old Krystin R. As a member of the Club's youth development program Great Opportunities (GO), which helps 16-24-year-olds prepare for college or a career, it was just another day at work for Krystin.

Because of her involvement with the GO Program, Krystin has been working as a trained Pharmacy Technician at Walgreens.

Fannieleah Brown, the Project Director of the GO Program, and Nicholas' mom knew Krystin was working at Walgreens and wanted to support one of her brightest students. So, she decided to take her kids there to get their COVID-19 shots.

Krystin administers around 60 shots a day on a busy day.

“It's amazing,” Krystin said. “I never thought I would be impacting the community like this.”

The GO Program has had more than 500 students go through the Pharmacy Tech program, which accepts students as young as 16. It's a robust program that requires certification and training, which means a lot of studying; it also looks great on a resume – especially if you want to major in pharmacy in college.

“The GO program is all about how to balance everything,” Krystin said. "I had a lot going on. And Miss Fannie or [my coach] Miss Melissa would help me even if I was in the car traveling from school to work. It taught me if you really want to do something, you'll have to put every effort you have. I knew I had mentors cheering me on, providing me with anything I needed.”

Nicholas also credits part of his success for being involved with the GO Program. He will head to Jackson State University in the fall to major in engineering and entrepreneurship, hoping to be a CEO of a company one day.

“They have taught me how to be a leader,” Nicholas said. “There's a difference between being a boss and a leader, and I know I want to be a leader, part of a team. The GO Program helped me a lot with that.”

Accepted to 35 colleges, Krystin ultimately chose Drake University, hoping to one day be a medical research pharmacist. She is grateful for her experience at Walgreens and knows she will go into pharmacy school with a wealth of knowledge more than some of her soon-to-be classmates.

“I just feel like GO Program helped me so much. I can't wait to come back and talk to other people going through the GO Program,” Krystin said. “I love talking about my experience and telling people what I went through and how I got here.”

Want to learn more about the
Great Opportunities (GO) Program?

The Great Opportunities (GO) program is a youth development program designed to help assist young adults between the ages of 16-24 years old with the education and exposure needed to embark on a path toward college or a career. This program provides the education, employment and experience to be successful.

Throughout the past 10 years, BGCC has placed more than 700 teen members in employment, post-secondary education, internships and training opportunities through this program. For more than the past 20 years, Boys & Girls Clubs of Chicago’s Youth Development Services has provided opportunities to hundreds of youth. We help youth members enrolled in high school, recent high school graduates, and those without high school diplomas achieve post-secondary and career goals. It is our pleasure to teach, train and elevate our city’s next workforce.

The GO Program offers a number of events and classes to help set you up for success when it comes to getting into college or a job. Contact Victoria Dorris at vdorris@bgcc.org to find more information and to start your GO Program journey.

HOW TO GET INVOVLED

Reach out to Case Managers

Contact Victoria Dorris at vdorris@bgcc.org to find out more information and to set up a meeting with a case manager. Or complete our interest form.

During a meeting with one of our case managers, we will together determine what path is best for you and what timeline works for your situation.

Once you enter our program we offer a number of events to attend as well as schedule status meeting that will set you up for success for the path you are on.